Professional Development People | Getting positive results from difficult situations – how do you get them?
304
post-template-default,single,single-post,postid-304,single-format-standard,ajax_fade,page_not_loaded,,qode-theme-ver-7.8,wpb-js-composer js-comp-ver-4.8.1,vc_responsive

Getting positive results from difficult situations – how do you get them?

23 Sep Getting positive results from difficult situations – how do you get them? 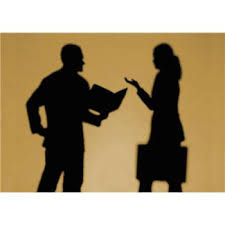 If you remember the scenario I left you with:

I had a really difficult situation some time ago at work, delivering a course for a FTSE 100 company, on which a delegate asked me if he could leave on day 1 at 3:00pm. The organisation was really hot on finish times, they didn’t like courses finishing early, so I was in a awkward position. How did I get a positive result from this difficult situation?

To try and gain some thinking time, always a good idea, I asked the guy why he needed to leave at 3:00pm. He replied that he was a dog breeder, that his bitch was at a fertile time and he needed to be home by 5:30pm, because the owner of another dog was bringing him over to mate.

We previously looked at the difference between someone’s attitude and their behaviour.  Behaviours are real, and as such can be heard, seen or even felt.  In comparison, attitudes are the responses to situations that might drive someone’s behaviour, which we are not party to, and may not understand.

In this scenario the delegate is:

I really had to deal with points 1 and 3 in this scenario, because the impact of 4 on me would have been highly negative.  Again, how did I get a positive result from this negative situation?

The fact that the delegate was making his request politely, allowed me an opportunity to build our relationship through some direct praise, once I had responded to the request.

What should I do?  Which of the delegate’s behaviours needed to be changed or maintained?  In the first place, it was inappropriate to ask for two and a half hours off work at the start of the course, and secondly, for the delegate to ask the tutor, who couldn’t give permission to give exactly that!

What was the impact of that behaviour?  It put me in a difficult position, as all the other delegates might then have reasons to go early.  In addition,  the FTSE 100 company that commissioned the training expected all their staff to stay for the duration of the agreed course. It also delayed the start of the course for all fifteen people, which could have had an effect on the amount of time spent on certain aspects of the material.

How did this make me feel?

What did I need to see from the delegate in the future?  Evidence that the delegate understood the situation and the possible implication of asking me to give him leave to finish the course early.

Getting positive results from difficult situations

How did I do it? The problem solving model I used in this situation, was called the BIFF model, a method of giving assertive feedback to someone, and can be used in a range of situations.

So what did I do?

I said to the delegate “I’m not sure that you were aware, but when you asked me if you could leave at 3:00pm today…” (BEHAVIOUR)

IMPACT  “that put me in a difficult position. I have to run the course according to set criteria, finish at 5:30pm, which I am not allowed to vary. I have to be fair to everyone, and keep things on track with time. I have no management power to grant you time off”.

“I am FEELING really under pressure, frustrated and powerless in this situation”.

“If you need to go at 3:00pm then that is your choice, you need to take that up with your line manager, as I cannot grant you that time off.  Please don’t indicate that I said it was OK because I cannot say that. I have to inform your employer of your attendance at both morning and afternoon sessions. I would rather you stayed or re-booked the course”. (FUTURE) 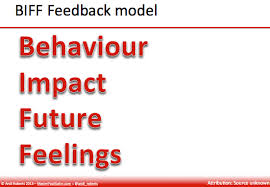 This approach was much more effective than me telling him what I really felt about his request. The outcome was a really positive one, the rest of the group knew who was in charge and that I was being fair.   The delegate knew where the responsibility lay for his decision.  He decided to ask his wife to manage the canine date, and stayed on the course and was very positive throughout the two days.  The open and honest dialog had helped build our relationship.

1) Think about what the person is  asking

2) Think about the behaviours they are displaying

DON’T waste your life trying to work out why they are doing it, as you won’t ever be right!

I’d be interested to hear your own experiences of using the BIFF model when giving feedback.